VyCAP offers a solution to isolate cells for clonal expansion in a tissue culture plate. Viable single cells can be selected and isolated based on their fluorescence, morphology or even on their secreted products. To analyse the molecules that single cells secrete our microwell array containing viable single cells is connected to a capturing surface.

VyCAP offers a complete, simple and automated solution for isolation single cells for clonal expansion. The solution consists of hardware and software with validated protocols. Single cells are isolated form our microwells and transferred  into a tissue culture plate for clonal expansion. Tools and protocols are currently available for researchers who are interested in selecting and expanding the best producing cells.

Selection and isolation of single cells for clonal expansion is performed under sterile conditions inside a flow hood. Depending on the cell selection criteria such as cell fluorescence, cell morphology or single cell secretion there are different workflows.

Measure cell secretion of all cells in the chip

Analysis of the cell secreted molecules like e.g. cytokines, antibodies, the micrwell chip is mounted onto a capturing surface. VyCAP has designed tools and protocols to clamp the capture surface, for example a PVDF-membrane, to the bottom of the microwells. In a project started in 2017 is was already shown that antibodies produced by cells in the wells diffuse through the pore in the bottom to the capturing PVDF membrane. Next, these secreted molecules can be analysed using ELISA like assays and the location of the captured molecules can be correlated with well in which the cell that produced these molecules resides. Next this cell can be isolated for clonal expansion. See workflow below. 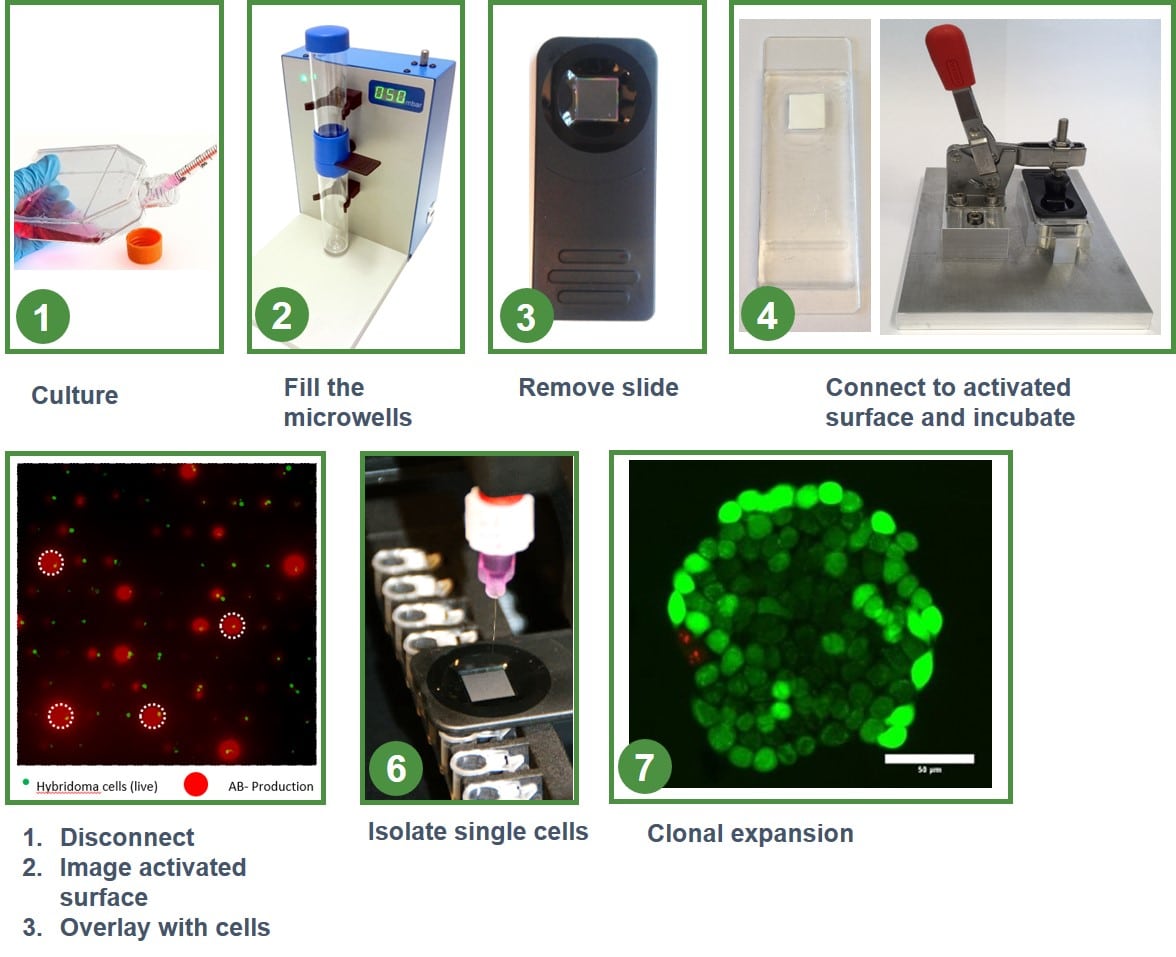 To detect what individual cells secrete the chip with viable cells is connected to a capturing surface. After 24 hrs of incubation the amount of produced and captured molecules is in general sufficient to analyse produced molecules.  At the moment a PVDF membrane is used as a capturing surface. The location of the printed molecules can be correlated with the cell in the microwell. After the correlation the best or most interesting cells can be isolated into a tissue culture plate.

The isolation chip has 6400 wells with a single pore in each well. The bottom of the well is optically transparent and has a thickness of 1 µm. To isolate single cells the well bottom together with a cell is punched in a culture plate. Punching is done automatically with the punching system in a flowhood. 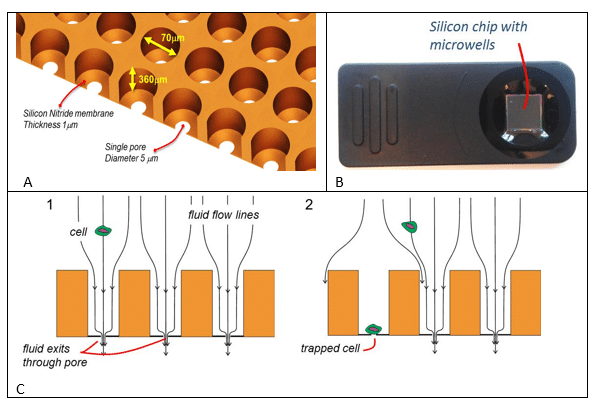 Below an example of MCF-7 cells that are labelled with a live/death staining. Calcein AM staining indicated that over 90% of the cells are viable after filtering (panel A). The user can isolate the single cells or put the microwell chip in an incubator and culture the cells while these are in the microwells (panel B).

During the whole process the cells remain in culture medium. To minimize the cell stress the workflow is designed  most efficiently with low pressures and minimal handling steps.

Cell culturing in a tissue culture plate after punching

Viable cells are punched from the microwells into a tissue culture plate for proliferation. The images below present an example of a single MCF-7 cell that is isolated and next expanded.The Puncher platform has been used to isolate and culture organoid, CTCs, hybridoma and CHO cells.

Cell proliferation inside the microwells

Alternatively the microwell chip with single cells can be placed in an incubator to culture the cells inside the microwells. The image below presents the proliferating of a single MCF-7 cell during 9 days. The microwell chips can be coated with a thin layer of proteins i.e. matrigel or fibronection to enhance cell adhesion and proliferation properties of the cells. Work has been performed in close collaboration with the University of Twente.

Puncher system is placed inside a flowhood

To maintain sterile conditions the Puncher can be placed in a flowhood. VyCAP has designed a dedicated flowhood with integrated monitor and cable connections from a  the Puncher microscope to the electronics below the flow cabinet. 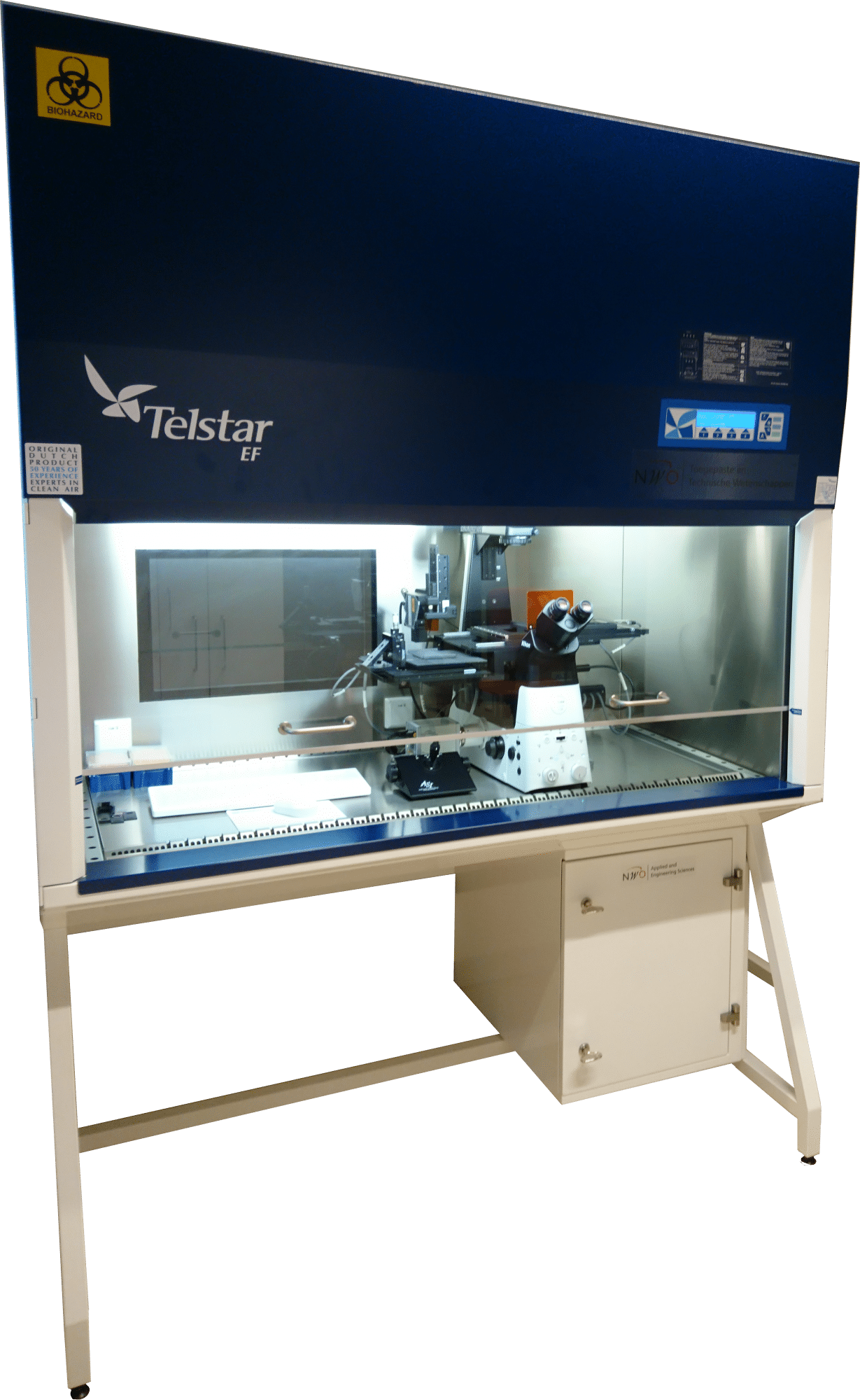